Masha and the Bear Wiki
Register
Don't have an account?
Sign In
Advertisement
in: Characters, Episodic characters, Guest
English

She is Masha's cousin. According to Goggle she is older than Masha, and she appears to be older. She is a bit more mature than Masha. Dasha has very light blonde hair, tied in bunches, and blue eyes. She wears blue wired spectacles-or glasses-, and was first seen in a red dress and white collared shirt.

Dasha has exceedingly good manners, as she curtsies upon arriving at Masha's house. However, she is very frustrated with Masha's unexpected ways.

Dasha lives in the city, as she likes it there, and only occasionally comes to visit Masha to get some fresh air and relax in the magic forest[1]. When Masha suddenly «matured», Dasha decided that she already can also go to the city. However, the growing up was provisional and Dasha had to return her sister to the station. 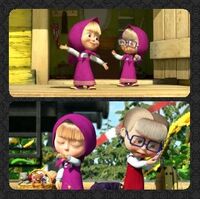